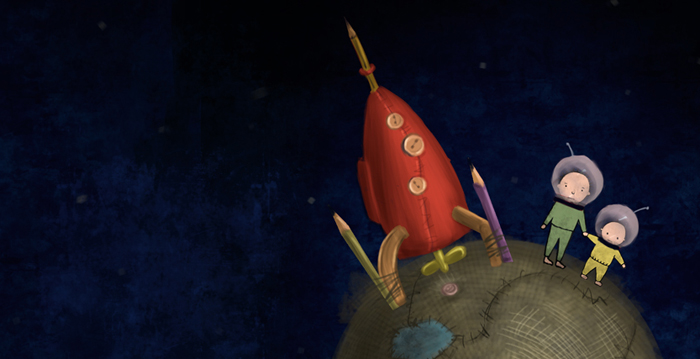 Little Brothers may not be much for most people that visit my portfolio, it being a very rough sketch of a prototype  of a game (a seed of an idea, honestly). But it has a special meaning for me. It’s the first attempt at a ‘serious’ game in Unity, while collaborating with a team of people that share more or less the same passion as I do. It’s that landmark that you feel weighs hard in your decisions, you know, to realize if you want to do this for the whole rest of your life. So it only seemed fair for me to talk about how Little Brothers got to be.

It all began with the challenge of making a game in five working days. Morale and creativity were really high, actually. And we had the luck of working with two great art directors who, although they had a rough idea of the look and feel of the future game, left plenty of room for us to contribute with our own ideas to it. This feeling of ownership is extremely important in game design. After all, you want the whole team to keep putting the same effort (and I’d say, soul) throughout the whole of the project cycle. How it happened was that we were presented with the poster on the left (please click to view full) which basically shows the outer space (there’s an angry pig there as well and I will die without knowing WHY). We were to come up with a suitable space journey to go well with the atmosphere described by this collage. The ideas ranged from a flying bed to a kid saving his family from the end of the world. A personal idea that I liked most was of a child dreaming himself during the creation of the universe and holding the seed of life in his hands. He was supposed to fight the darkness in order to bring this seed of life to Earth so that all creation can BE. Of course, not all of them could be part of the final game. The art direction preferred emphasising the idea of family over loneliness, but my shadow opposition actually got through. The final story became one of brotherly love: the two children had a small spaceship which broke down, and they had to fix it by finding the missing parts on shadowy planets. The only way in which they could fight the darkness was by holding hands and generating warm light and affection. If the two children were far from one another for too long, the darkness would defeat them and the game would be lost.

This light versus darkness mechanic could generate a lot of gameplay goodness, as it can be seen in the below storyboard. The darkness could really be made palpable by introducing real monsters into the equation, which could always hunt the little brother to take him away. A lot of obstacles could be introduced between the two brothers to separate them and make the game risky – quicksand, doors and levers being just some of them.

The Little Brothers Storyboard presents three gameplay scenarios that were unfortunately not introduced in the final game due to lack of time.

Unfortunately, we soon found out that five days is hardly enough to do anything properly. We had to eliminate any preproduction from the process and ended up setting our aims a bit too low. Moreover, during the production process, we discovered that we had quite a serious bottleneck problem inside the art team. The programming team would slack off most of the time waiting for assets to introduce into the game. What we ended up with eventually was a tutorial level that would nicely illustrate the mechanics of the game, but which doesn’t feature a lot of proper gameplay.

That being said, you’re invited to take a taste into our game, which features lovely art direction and sound dynamics, but not much else.