Notice: Trying to access array offset on value of type null in /home/pucilica/public_html/wp-content/plugins/qode-instagram-widget/lib/qode-instagram-api.php on line 240

Warning: count(): Parameter must be an array or an object that implements Countable in /home/pucilica/public_html/wp-content/plugins/qode-instagram-widget/lib/qode-instagram-api.php on line 250 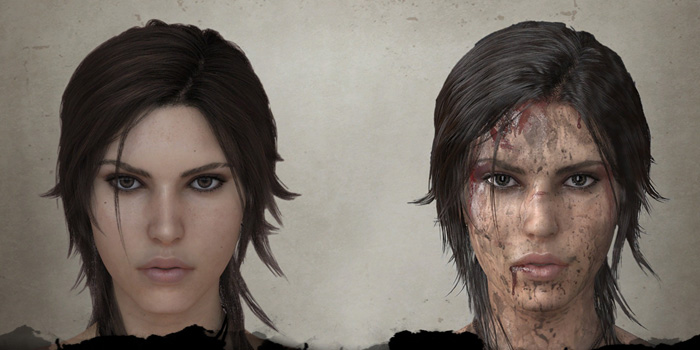 Why did Tomb Raider had to be reinvented? What was wrong with the generously breasted, fully lipped flawless female pistol wielder that used to territorial piss on ancient tombs with lame British jokes? If you look back in the press, it seems as if the Indiana Jones femme fatale concept has suddenly become exhausted, at least from the game publisher’s point of view. Does this mean that games are growing up, or is this the direct result of the fact that the demographics of players are changing, that women are slowly taking their rightful place at the keyboard and gamepad?

I would say it’s neither. After all, a voluptuous woman who is confident in her own sexuality is, at least for me, better at conveying the feminist ideal. While we are supposed to see humanity and personal evolution in the new out-of-teenagedom Lara, the first 10 minutes of the game are full with squeals of suffering that are in a way much more perverse than any trick the old Lara could have pulled. Sure, old Lara showed some skin and was inviting in a playful way. The new Lara on the other hand wrestles through mud and blood, progressively learning how not to blink when cracking a skull. It’s all erotically appealing in a hyper-violent way. It’s not all about the size of the breasts. Lara’s innocence is flawed in a fundamental way, and we are all forced to view here with the desirous eyes of Jeremy Irons in Lolita.

Secondly, there is the question of maturity. I wouldn’t say that the new Lara is turning the franchise into a ‘serious’ game. On the one hand, Tomb Raider, the reinvented one, is much too conscious of its own desire to shock, awe and raise questions of unnecessary violence to be really taken seriously. The supernatural is ostentatiously and almost completely ripped from the gameplay mechanics and we are left with a Lost like plot in which Lara has to save her stranded friends from the enraged spirit of an Oriental storm queen. The scene of the first deer hunt is super-charged with drama. Horny Russians encircle Lara, lusting over her questionable virginity. She gives back violence to the world because she is forced to…

On the other hand, every game relies on the convention of gaming. Players readily accept the rules of the game because they want to have fun. They can kill as many island animals and human inhabitants as they want because after a reload, those will respawn. Games are fun because they have no consequences in the real world and we can experiment with being someone else in a safe environment. Thus, creating a tension between moral values (which almost exclusively belong to the field of reality) and the loose rules of gaming ultimately bestows artificiality upon a game. In Tomb Raider, this artificiality is visible in the contrast between those dramatic cutscenes I mentioned before and Lara’s readiness to kill outside the cutscenes. Of course, the developers struggle to create the sense of evolution from an innocent Lara to the mean killing machine in the end. This is done through animations of clumsy rock climbing, efforts at pushing oneself up on a ledge and the absence of complex killer moves in the beginning of the game. All smooth animations and combo moves can be unlocked by spending points and leveling up, ultimately stripping Lara of all her common sense with some simple clicks. Obviously, this fools no one.

Even the tomb raiding has been reduced to an optional experience, while the tomb puzzles themselves are a joke compared to what the booby Lara had to put up with. So then, how is a game smarter and more mature if it cannot challenge the mind on at least the same level as its predecessor?

Don’t get me wrong, Tomb Raider is a pleasant game. Linear and dumbing down, it is an interactive cinematic experience much in the line of Mass Effect 3. It boasts a decent story, pretty graphics, functional level design and killer hair (how many games really have THAT on their agenda, huh?). I’m okay with that and I can enjoy the button mashing with no remorse to the very end. However, I’m not okay with the thick moral discourse that comes out its every pore. If you put a shotgun in my hand, don’t smack me over the head every time I use it. It’s simply a huge turnoff. Then again, I guess this is the clumsy way in which games get back at all those politicians which exclusively blame violence on them.

Which brings me back to the question of Tomb Raider’s reinvention. Putting too much weight on Lara’s identity and symbolism is an overkill. Ultimately, the makeover is a marketing move. Games are meant to sell, and innovation sells better than the same old icon, no matter the size of the bra. It’s not about women gaining ground, it’s not about game shaking off their apparent superficiality. It’s simply about the tingly sweet sound of money.